How fruit trees in Indian village save girls' lives

In India, where traditionally boys have been preferred over girls, a village in Bihar state has been setting an example by planting trees to celebrate the birth of a girl child.

In Dharhara village, Bhagalpur district, families plant a minimum of 10 trees whenever a girl child is born.

And this practice is paying off.

Nikah Kumari, 19, is all set to get married in early June. The would-be groom is a state school teacher chosen by her father, Subhas Singh.

Mr Singh is a small-scale farmer with a meagre income, but he is not worried about the high expenses needed for the marriage ceremony.

For, in keeping with the village tradition, he had planted 10 mango trees the day Nikah was born.

The girl - and the trees - were nurtured over the years and today both are grown up.

"Today that day has come for which we had planted the trees. We've sold off the fruits of the trees for three years in advance and got the money to pay for my daughter's wedding," Mr Singh told the BBC.

"The trees are our fixed deposits," he said. 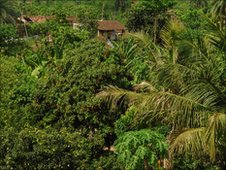 The village looks like a forest or a dense green patch

In Bihar, payment of dowry by the bride's family is a common practice. The price tag of the bridegroom often depends on his caste, social status and job profile.

The state is also infamous for the maximum number of dowry deaths in the country.

But the mango trees have freed Nikah's parents of undue worries. And their story is not unique in Dharhara village.

With a population of a little over 7,000, the village has more than 100,000 fully grown trees, mostly of mango and lychee.

From a distance, the village looks like a forest or a dense green patch amidst the parched and arid cluster of villages in the area.

And most residents can be spotted sitting in the cool orchards outside their homes.

"Now, we've stopped doing traditional farming of wheat and paddy. We plant as many trees as we can since they are more profitable and dependable," said villager Shyam Sunder Singh.

The villagers have been planting trees for generations

Mr Singh paid for the weddings of his three daughters after selling fruits of trees he had planted at the time of their birth.

"One medium-size mango orchard is valued at around 200,000 rupees ($4,245; £2,900) every season. These trees have great commercial value and they are a big support for us at the time of our daughter's marriage," he says.

The villagers say they save a part of the money earned through the sale of fruits every year in a bank account opened in their daughter's name.

The tree-planting has been going on in the village for generations now.

"We heard about it from our fathers and they from their fathers. It has been in the family and the village from ages," says Subhendu Kumar Singh, a school teacher.

"This is our way of meeting the challenges of dowry, global warming and female foeticide. There has not been a single incident yet of female foeticide or dowry death in our village," he says.

His cousin, Shankar Singh, planted 30 trees at the time of his daughter Sneha Surabhi's birth.

Sneha, four, is aware that her father has planted trees in her name; the child says she regularly waters the saplings.

As yet she doesn't know what dowry is, and says the trees will bear fruits for her "to eat".

The village's oldest resident, Shatrughan Prasad Singh, 86, has planted around 500 mango and lychee trees in his 25 acres of land.

His grand-daughters, Nishi and Ruchi, are confident the trees mean their family will have no problem paying for their weddings.

"The whole world should emulate us and plant more trees," says their father Prabhu Dayal Singh.

4 hours 30 min ago
NHS Forest
@NHSForest
RT @NurseaTree1: "According to the IPCC, we must plant, protect and grow one billion hectares of forests before 2050 to help limi… https://t.co/RcrvP6W28c